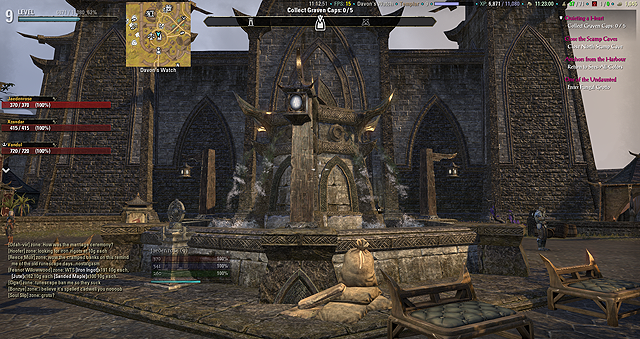 Purchasers of the imperial edition of Elder Scrolls Online receive the Rings of Mara. In order to get this perk, two players have to make use of the Ritual of Mara. END_OF_DOCUMENT_TOKEN_TO_BE_REPLACED

Loot is found all over Tamriel in Elder Scrolls Online. Often, this treasure is found in locked treasure chests at random locations. Here’s a few things to keep in mind as you try to unlock chests, as well as the best way to go about unlocking them. END_OF_DOCUMENT_TOKEN_TO_BE_REPLACED

With less than 24 hours to go before early access begins for Imperial Edition players of Elder Scrolls Online, those eager to begin exploring Tamriel might have a few questions. Zenimax Online Studios has the answers for you in their Early Access and Launch FAQ. Here is a break down of a few of the most important questions. END_OF_DOCUMENT_TOKEN_TO_BE_REPLACED

Bugs can be the very bane to a gamer’s existence, especially if they can occur repeatedly. They are even worse when they force us to have to start over to our last save point. So far, I have found two bugs on The Raft level of Lego Marvel Super Heroes. So here is my bug report. END_OF_DOCUMENT_TOKEN_TO_BE_REPLACED

Black Widow and Hawkeye start in the square where Doctor Octopus was captured. The duo is at the top of the red stairs. There is a lot of electricity flaring around that the two need to get past in order to get to Oscorp Industries.

Switch to Hawkeye and go to the top of the stairs or behind the stairs around by the billboard. Shoot at the billboard behind the stairs to knock it down and reveal targets for Hawkeyes arrows to stick into. Fill each of the four targets with an arrow. Go down the stairs around to the barricade where the arrows are sticking out of the building. Jump up and grab the arrows. Swing across them until you reach the other side. Switch to Black Widow and bring her across.Black Widow will not cross on her own.

Spider-man has once again joined up with the team of heroes to defeat the villain. They head out on the rooftops again from the Daily Bugle in pursuit of Doctor Octopus. Doctor Octopus flees across the rooftops behind a sign of Spider-Man himself. It’s time to stop this mechanical maniac.

When the characters load in, you are at the top of a staircase. Go back down the stairs and switch to Mr. Fantastic. There is a grate there that he can use. Slip through the grate and Mr. Fantastic will emerge in a small glass room on another part of the building. Bust everything for Lego coins and then go back through the grate. This is optional.

Across from the top of the stairs is the save terminal.

If you haven’t already saved your game, be sure to do so now. Switch to Spider-man and have him target the pull target across the roof on a blue communications tower. This will pull the tower down to make a bridge so the characters can cross. Octobots will try to deter your path.

See the complete article on GameSkinny.com about finishing the Baxter Building.

The cosmic brick retrieved by Spider-man, Iron Man, and the Hulk has been sent to the Baxter Building to Reed Richards (Mr. Fantastic) for research and analysis. Mr. Fantastic and Captain America are sent to check on it. When they arrive, something is terribly wrong. Huge crowds are outside the building and the front has been barricaded by the police. END_OF_DOCUMENT_TOKEN_TO_BE_REPLACED

After being swept out of Grand Central Station by a sand swirl, the Hulk and Iron Man have met up with Spider-man on the rooftops of New York City. Spider-man will come in handy a fair bit in this stage of the game. With his heightened senses through spider sense, he will be able to find things Iron Man and the Hulk can not. END_OF_DOCUMENT_TOKEN_TO_BE_REPLACED

Once again, the superheroes of the Marvel universe are being called into action in Lego Marvel SuperHeroes! END_OF_DOCUMENT_TOKEN_TO_BE_REPLACED